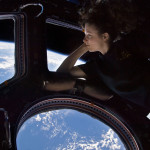 On October 30,2000, I was listening to a news radio broadcast from the Canadian Broadcasting Corporation (Windsor, Ontario is just across the river from us). The newscaster observed that this day might go down in history as the last day in which a human was not living in space. The first crew to inhabit the International Space Station (ISS) launched on October 31, 2000 and docked with the ISS two days later. Since then, there has not been a day in which a person has not been living in outer space.

I thought of that in conjunction with what is on the Church calendar today. We’ve commemorated key events in the history of Christianity over the last few days. On Thursday, we celebrated Maundy Thursday (also known as Holy Thursday), remembering the Last Supper which Christ had with His apostles, as well as His agonized prayer in the Garden of Gethsemane just prior to His arrest. On Friday, we remembered what is called Good Friday, in which the Lord Jesus was tried, condemned, suffered and died a horrifying death on a Roman cross just outside Jerusalem. Tomorrow, Easter Sunday, we will remember the resurrection of Christ from the dead. It was a resurrection in which the Lord Jesus, in His humanity, will never die again.

Like the CBC newscaster back in 2000 who noted what he did about the ongoing presence of humanity in space, I reflected on the fact that on this Saturday of Holy Week, today we remember the last full calendar day in human history on which Jesus of Nazareth would ever be dead.

The historical evidence I’ve seen seems to point to Friday, April 3, 33 A.D. as the day of the crucifixion. Therefore, Saturday, April 4, 33 A.D. was the last full calendar day in human history in which the Lord Jesus would be dead.

That has staggering implications for all of us. He who is God, the second person of the Trinity. and also human, in His humanity, has become the first human to regain physical life in an imperishable, regenerated body. He has been alive in that body since April 5th, 33 A.D.

Think of the human history He has witnessed and guided. For almost twenty full centuries, He has been in Heaven, alive in His regenerated body. As generations have come and gone, He has watched as your ancestors lived out life in their generations. For those of your own ancestors who trusted in Him, He continued His special work in their lives.

The writer of the letter to the Hebrews notes this in pointing out to us:

“He is able to save to the uttermost those who draw near to God through him, since he always lives to make intercession for us.” (Hebrews 7:25 ESV)

Because of His rising from the dead, there won’t be another “last day” for Jesus. For those who have trusted in Him, and do so today, we must rejoice and be glad. There will never be another day in history, ever again, in which we live and Our Savior doesn’t.