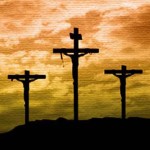 Today, the Church remembers the suffering and death of Christ on a cross outside Jerusalem about the year 33 A.D. On this Good Friday, I’ve been reflecting on what happened on that day almost 2,000 years ago.

I think this is significant. All four Gospel writers thought it was an important enough detail to record for their written account of what happened to the Lord Jesus that day. Matthew and Luke give us a bit more information about what happened.

In Matthew’s account, we find bypassers, chief priests and elders who mocked the crucified and dying Jesus. In the text, we see also:

“The robbers who were crucified with him also reviled him in the same way.” (Matthew 27:44 ESV)

One of the criminals who were hanged railed at him, saying, “Are you not the Christ? Save yourself and us!” But the other rebuked him, saying, “Do you not fear God, since you are under the same sentence of condemnation? And we indeed justly, for we are receiving the due reward of our deeds; but this man has done nothing wrong.” And he said, “Jesus, remember me when you come into your kingdom.” And he said to him, “Truly, I say to you, today you will be with me in Paradise.”  (Luke 23:39-43 ESV)

Some might look at these texts and see a contradiction. However, the same Holy Spirit who inspired Matthew to write also inspired Luke. How do we harmonize these two accounts?

I think the simplest way to harmonize them is to see that one of the robbers repented and placed his faith in Christ while on his cross and the other robber remained hostile and apart from Christ..

I think that these accounts give us a very compact picture of human destiny. We see two humans, both of whom are hostile to Christ when their time of crucifixion begins. Yet, one remains hostile to the end and refuses to allow his eternal destiny to be changed. The other comes to faith in Christ and is ultimately saved from his eternal condemnation.

What a picture of human destiny. The perfect human, Jesus Christ, is in the midst of sinful and hostile humanity. In His dying, He brings life and peace to others. His death (and also in His resurrection days later) changes the destiny of those who trust in Him, giving hope, purpose and eternal life.

What encouragement for us to trust Christ. The thief who repented had no list of good things he did for God. His life was lived in rebellion to God and to the people around him. With only hours to live, under a sentence of death, both physical and spiritual, he brings nothing to recommend him. In the midst of his crucifixion, he changed his mind. With words of implicit trust said to Jesus, this robber’s destiny was changed. After this, he wasn’t going to have a long lifetime to do the work of Christ on Earth. But it can be truly said that he spent the remainder of his life faithful to Christ (even if that life was to be measured only in hours). No long list of good works already done to recommend him to God. No promise of a long life to do the work of the kingdom of God. Only simple trust in Christ in the midst of nothing else. Yet, such faith then and today hears the promise echo back: “Today, you will be with me in Paradise.”