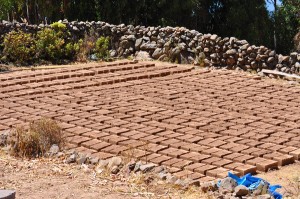 The following is Part 2 of “Bricks Without Straw.”

We live in an era in which more and more time is demanded of us. According to a December 2013 Gallup Poll, 11% of Americans got less than 7 hours per night in 1942. That percentage increased to 40% in 2013. Concerning our amount of time at work, the Center for American Progress states:

The typical American middle-income family put in an average of 11 more hours a week in 2006 than it did in 1979.

With only a fixed 168 hours per week for all of us, this comes at a cost. It comes at the cost of less time for family, church, community service, friends and leisure activities. Even our children face time demands unknown a generation ago. In a 2002 article for Newsweek, entitled Doing Nothing Is Something, Anna Quindlen, wrote on the need of kids to have more “downtime”. She wrote:

Soccer leagues, acting classes, tutors – the calendar of the average middle-class kid is so over the top that soon Palm handhelds will be sold in Toys ‘R’ Us. Our children are as overscheduled as we are, and that is saying something.

Whether part of a purposeful strategy by the Evil One or the result of life circumstances which legitimately require our increased time and attention, how do we keep our minds on Christ, when it seems that we are being forced to make “bricks without straw?”

THE SOVEREIGNTY OF GOD

I have found comfort in the fact that God does indeed control all things. His Spirit blows through the sails of the ship of human history while His hand is firmly on the rudder. His purposes will eventually be accomplished (Proverbs 19:21; Isaiah 46:10). Yet, God’s control is not just on the large-scale level of national and global events. He knows us individually and knows us well and at a level of detail which we cannot know ourselves. The Psalmist instructs us as he prays to God:

O LORD, you have searched me and known me! You know when I sit down and when I rise up; you discern my thoughts from afar. You search out my path and my lying down and are acquainted with all my ways. Even before a word is on my tongue, behold, O LORD, you know it altogether.  (Psalm 139:1-4 ESV)

Such a God is no stranger to our needs and circumstances. In Acts 17:25-26, Paul tells us that God created us and put us where and when we are for the very purpose of our finding God:

From one man he made every nation of men, that they should inhabit the whole earth; and he determined the times set for them and the exact places where they should live. God did this so that men would seek him and perhaps reach out for him and find him, though he is not far from each one of us.

In the stress-filled times in our lives, there is a tendency to look to another time or place as where we would find comfort and contentment. David, during his years of being chased through the land of Israel like a criminal, wrote:

Oh, that I had the wings of a dove! I would fly away and be at rest- I would flee far away and stay in the desert; I would hurry to my place of shelter, far from the tempest and storm. (Psalm 55:6-8)

With King Saul and his army pursuing him, Israel’s future king wanted to be anywhere other than where he was. I think we’ve all had that feeling at some time. Being a history buff who has seen his share of 18th and 19th century American buildings, I used to think that life must have been much simpler (and thus better) in those times.

Yet, the Bible tells us that the best time and place for us to live for God’s glory is where He has put us and in the time He has placed us. (As in, right here, right now). God knows that for me, for the person that I am and He wants me to be, I need to be alive now in early 21st century America and not in the America of the 18th century or any other time and place. That holds true for all of us. Where and when we live in the scheme of human history is not an accident. The Lord knows us and the events that make up our lives. The hospitalizing of Julie and then my Mom did not take Him by surprise. Yet, according to Him, it is in the midst of life circumstances such as these that God tells us, amazingly, that we can best reach Him.

Part 1 of this article can be found here.